Well, as we close in on the end of 2013, we'd like to thank all of you for continuing to support us and help us become one of St. Louis' best cover bands!!  Without you all, we wouldn't be successful.

Looking back, we had a great year; releasing our first CD, getting to know actor/comedian Derek Miller, playing for the 2nd consecutive year on the Monster Energy float in the Mardi Gras parade, passing the torch for "Best Band Name" in the Riverfront Times over to Kentucky Knife Fight, several weddings (including our pianist Joe's), Mike and his wife having their first child, shooting our first music video, awarding our very first Dance Floor Riot Performing Arts Scholarships and who can forget, introducing the world to "Bacon Pancakes"?!

We're really looking forward to 2014.  We'll be saying "goodbye" to some of our regular venues, and saying "hello" to some new ones, releasing our first music video, playing in the Mardi Gras parade again and various other new ventures for the band.  There's been a lot of rumors through the grapevine of what DFR has in store for 2014.  Some of the below listed rumors are from the band, and some are completely made up... regardless, here are a few of them.  You can decide.

Possibly releasing a 2nd CD.
A new member addition to the band.
Spicing up the on-stage appearance of our show.
Playing a show completely nude.
Introducing a DFR beer.
Touring around the US.
A new tie color for the band "uniform".

Regardless which of these you believe, we certainly want YOU to be a part of our journey through 2K14.  We'll be ringing in the new year at Mile 277 in South County, and it will positively be THE place to celebrate the closing of 2013.

Follow us on Twitter and Instagram (@DanceFloorRiot), to get all the latest info before it hits our web site or facebook, and to see some behind the scenes gems you won't see anywhere else!

This blog entry was written by St. Louis local writer James Atchison a couple years back when we relocated our rehearsal space to the Lemp Brewery.  Quite the interesting story and background! 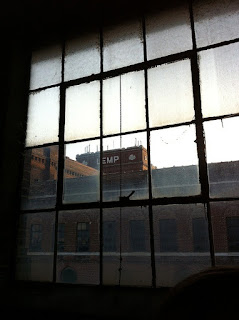 DFR has relocated to the Lemp Brewery!
A famous location found in the heart of St. Louis. The brewery and adjoining mansion has a long and intricate history dating back to the mid 1800’s. Sprawling across five city blocks including caverns and tunnels below the Brewery is an absolutely massive complex including some areas that haven’t been seen in over a hundred years. The tunnels which still connect the mansion to the brewery proper were once used as the preferred travel method of the Lemp family who owned and operated the brewery throughout its operational life. After two generations of successful operation, the Lemp Brewery began its spiral down into the record books as the most haunted locale in STL.
The fortunes of the Lemp family and that of at the time 3rd largest brewery in St. Louis saw a change to one of strife and misery after the apparent suicide of owner William J. Lemp Sr. in February of 1904.  The following years would see the decline of the brewery and the Lemp family line. Through the advent of the Temperance Movement (Prohibition) and the efforts of Brewing Associations, individual companies like the Lemp Brewery saw their dominance of local and nationwide business threatened, that tied with the string of apparent suicides in the Lemp family from 1904-1949 effectively closed the noose on the Lemp family line. Each death was shrouded in mystery and misdirection. Elsa Lemp’s supposed suicide occurred just days after her marriage to William Lemp Jr. who after selling the Lemp Brewery Complex two years later proceeded to his office in the Mansion where he too committed suicide. Tragedy after tragedy followed the Lemp family from the suicide of a bride still celebrating her honeymoon to the death of William Lemp’s young child in the mid 1940’s. The final nail in the Lemp family coffin was hammered home with the death of Edwin Lemp at age 90. It is believed that Edwin only survived so long because he sold off and removed all ties between himself and the Brewery after the suicide of his brother Charles Lemp in 1949.
Now the Brewery has a new lease on life with business slowly returning after the St. Louis board of Alderman contracted LB Redevelopment to rehabilitate the brewery. LB Redevelopment have plans for the larger buildings to be turned into restaurants and entertainment destinations, as well as a planned 3500 seat event center, the plans include the design and beautification of several courtyard areas and the designing of an 80 room hotel. DFR is right here in the middle of all the action at Brewhouse Studios where sometimes the laments of the lost and tortured souls of the ill-fated Lemp family can be heard in Unison with the music played throughout their haunted halls.
Posted by Dance Floor Riot at 9:27 AM No comments:

CONGRATULATIONS to Joelle Harms and Courtney VanDamme for being selected to receive the first 2 Dance Floor Riot Performing Arts Scholarships!! We worked closely with Fox High School for the decision to choose these 2 students to receive the innaugural scholarships, Joelle specializing in band and Courtney in vocal performance.  We wanted to give back to students who are going to college to pursue their craft in hopes they would continue to chase their dreams!  We would like to thank the individuals and organizations who have contributed to making this a success; Mitch McAllister, Steve Ewing and Steve's Hot Dogs on the Hill. 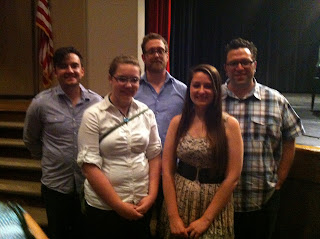 Congrats again Joelle and Courtney, and we wish you much success in the future!!
Posted by Dance Floor Riot at 7:39 AM No comments:

We were fortunate enough to be nominated under the Cover Band category for an RFT Music Award!!  We have some incredible competition in thios category, but with your help we can win this thing!!  PLEASE visit this link http://polls.riverfronttimes.com/polls/stl/musicawards2013/ and vote for us under the cover band category!  As for the other categories, you can vote for whoever you'd like, or not... your call.  Thanks for your help, and see you soon!!
Posted by Dance Floor Riot at 12:11 PM No comments:

As you know, our CD Release Party is at the infamous Blueberry Hill in the Delmar Loop on January 26 from 9-12:30.  You know that it will be the debut of our very first CD that night.  You also know that "Those Guys" will be opening for us, which is an amazing acoustic duo.

What you didn't know... actor Derek Miller, who plays Barry on the hit tbs show Wedding Band will be hosting and emceeing the show that night! You may also recognize Derek from his appearance in Transformers: Dark of the Moon or the show Scrubs. 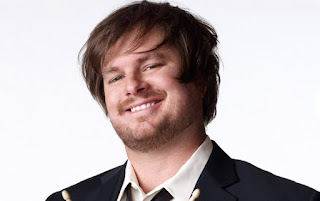 Derek will be introducing the bands and hosting the show that evening!  So come out, show Derek some StL love and let's make this a night to remember, and in the meantime, be sure to watch, or at least DVR Wedding Band!!
Posted by Dance Floor Riot at 12:40 PM No comments: